NOW® is making public a series of product tests the company did internally on CoQ10 and SAMe products purchased on Amazon.com that showed potency far below label claims.

“Today, especially, more people are buying their supplements online, which is why we are making this information public,” said Dan Richard, Vice President of Global Sales and Marketing. “NOW takes defrauding consumers personally and it is in the best interest of the entire dietary supplements to identify and work to purge such bad actors to protect consumers.”

“We initially tested the CoQ10 because we had serious questions about the dosage form: it is almost impossible to run this potency (400mg) of sticky CoQ10 in a dry capsule on machines,” said Aaron Secrist, Vice President of Quality and Regulatory Affairs. “We suspected the SAMe to be low potency, which they were, with several delivered in an unstable form.”

All samples were tested by High Performance Liquid Chromatography (HPLC) in NOW’s highly respected labs using validated methods. HPLC is widely considered the best fit for purpose test method for both of these materials.

The CoQ10 products, which were almost all labeled as 400mg in dry capsules, contained far below the claimed amount, if any CoQ10 was detected at all. This is the second time NOW tested these and similar no-name brands purchased on Amazon, and these new results are consistent with what was found two years ago.

NOW also tested suspicious SAMe dietary supplements available on Amazon.com. SAMe is typically unstable due to heat or moisture, which is why most brands, including NOW, enteric coat SAMe within tablets. Another way to stabilize SAMe is the form S-Adenosyl-L-Methionine from disulfate tosylate salt. NOW suspected the products they tested to be low potency or in an unstable form. One additional brand, PureControl Supplements, badly mislabeled their product by claiming 1500 mg SAM-e from “500 mg as adenosyl-methionine-disulfate tosylate” in only two capsules, a mathematical impossibility. 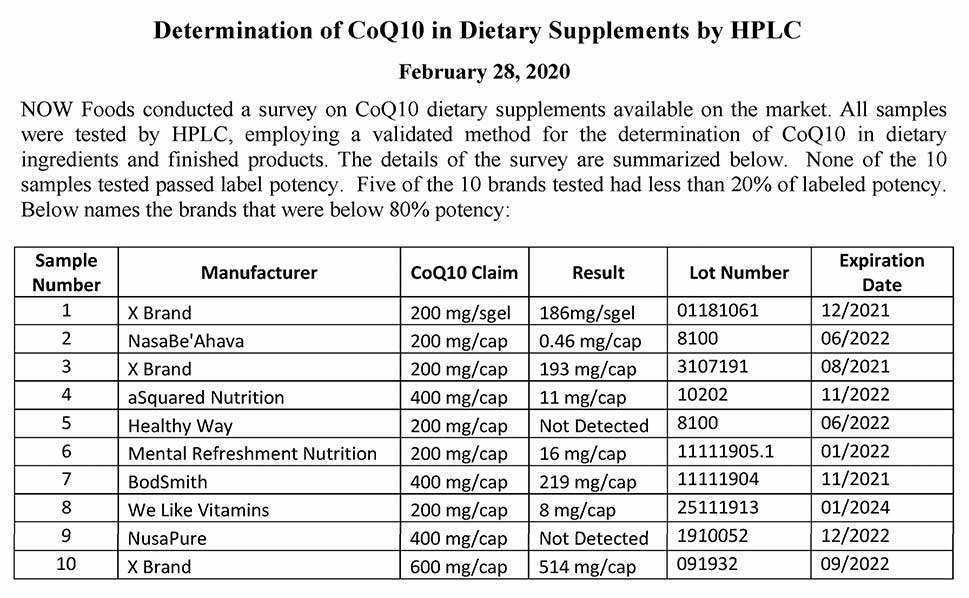 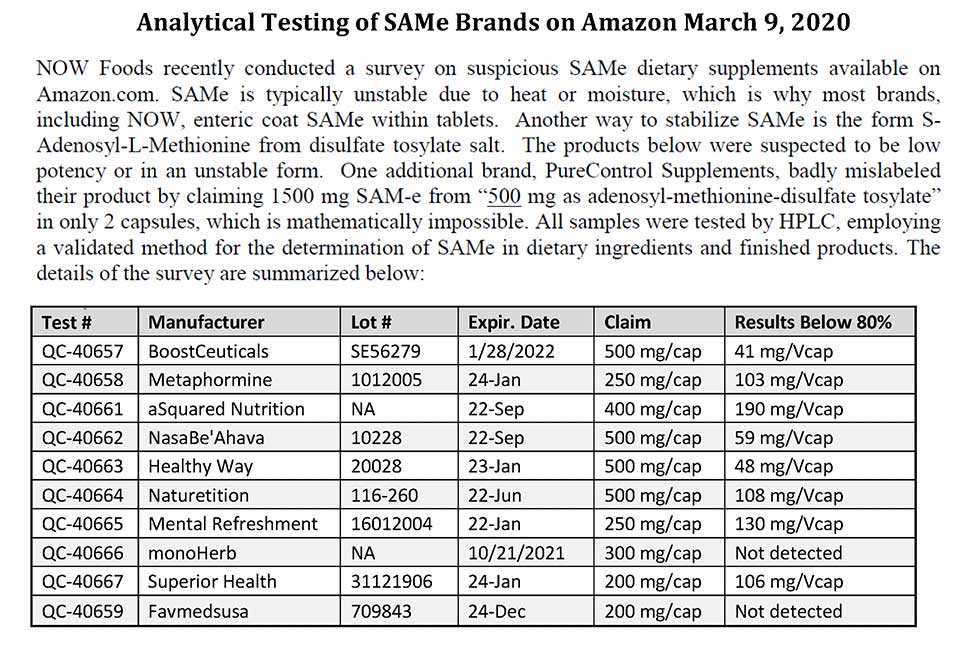 100% of NOW SAMe products are tested for potency and have minimum overage of 5% added at time of manufacture to assure full potency at time of expiration. NOW SAMe is also tested for disintegration time, microbiological safety and heavy metals such as arsenic, cadmium, lead and mercury in every lot sold.

Additional information can be found at truthinadvertising.org (search for "SAM-e") regarding various brands called out in a 100-page lawsuit about SAM-e.