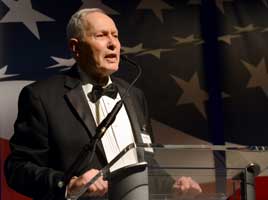 NOW Foods and its founder Elwood Richard were honored with three awards by prominent law firm Emord & Associates at the firm’s Sacred Fire of Liberty Gala, held September 5 - 6 at the Hyatt Regency Resort in Cambridge, Maryland. The event celebrated the firm’s 20th Anniversary.

Elwood Richard, NOW Foods’ founder and webmaster for Natural Health Research Institute (NHRI), was presented with two awards: the Excellence in Nutrition Science Award for his extraordinary work in association with the NHRI, a non-commercial, independent, non-profit organization that supports science-based research on natural health and wellness, and an Excellence in Health Product Innovation award.

NOW Foods received the Sacred Fire of Liberty Award in recognition of their support of consumer access to healthy lifestyle products and information.

"NOW Foods and Elwood Richard are powerful forces of good in the dietary supplement market,” said Jonathan Emord, President of Emord & Associates, PC. “By supplying the world with affordable and effective formulations, they have enabled millions to gain independent control over their own health. What is more, through its exceptional quality control, innovations in manufacturing, and support of freedom of informed choice throughout the world, NOW has proven itself an exemplary corporate citizen."