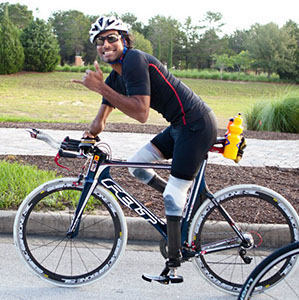 Hi, I’m Rajesh Durbal. I was born as a TRIPLE amputee. A congenital defect left one arm partially developed and required amputation of both my legs (below the knees) when I was one year old. I was fitted with prosthetic legs which I learned to walk with. I persevered in life and was always competitive in snowboarding, slalom skiing, track and field, with a world record in the 100m at the age of 15 years old. I am not only an accomplished athlete, I am also an industry IT veteran in building engineering teams and innovation groups to steer and lead major technology initiatives. 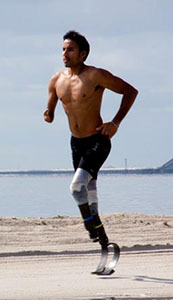 In 2009, I decided I wanted to participate in and completed the City of Orlando's Corporate 5k. This inspired me to complete numerous races(half marathons, marathons, adventure races and triathlons) to become a significant advocate of health/fitness for the physically challenged and anyone who witnessed me in motion. Following my mantra to Live Free, Live Amazingly, in just a short year and a half from my first 5k, on October 8th 2010, I became the FIRST TRIPLE AMPUTEE in history to complete the Hawaii Ironman World Championship -- a 140.6 mile race at 14 hours 19 minutes and 12 seconds.

I then broke my record in 2011 by completing the Ironman World Championship in a time of 13 hours and 49 minutes. Following my accomplishments I’ve received worldwide recognition, including the Mayor of Orlando Nationally proclaiming Feb 7th 2011 as the Rajesh Durbal Day in the City of Orlando.