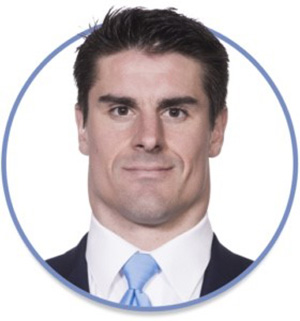 My name is Ian Wild, and I am a professional football player for the Toronto Argonauts of the Canadian Football League (CFL). I was born in Pittsburgh, Pennsylvania, where I competed in numerous sports in high school, most notably lacrosse and football. I didn’t receive many scholarship offers coming out of high school, but was fortunate enough to have received an academic and athletic scholarship to play football at Mercyhurst University. I went on to graduate from Mercyhurst University (Erie, PA) in 2012 with a bachelor’s of arts degree in Accounting. While at Mercyhurst (NCAA Division II), I was a dual sport athlete playing football and lacrosse. During my junior year, our football team won our conference championship and made it to the elite 8 in the national playoffs. That same year, in the spring, my lacrosse team had won the National Championship. Talk about a great year! Individually, I was recognized as an All-American on the football team and was named the Most Outstanding Player in the DII Lacrosse National Championship game.

During my senior football season, I lead the nation in tackles through the first eight games that I played. In game eight, I suffered a dislocated shoulder that would end my season and require surgery. It seemed that my hopes of playing professional football had been smashed. I left school in order to get surgery back at home in Pittsburgh, where I finished school online and began rehab. Because I had such a strong season leading up to my injury, I was determined to give my best effort at playing football at the highest level in the NFL. It was during this time that I really started to invest my time and focus into healing my body and becoming the healthiest person and athlete that I could become. I started seeing a nutritionist, eating clean, and taking the correct supplements (when I was introduced to NOW® vitamins/supplements).

At my pro day (four months post-surgery), I hit almost all of my goals, posting 18 reps on the bench press, which showed scouts that my shoulder was back to 100 percent. That spring, I was signed by the Buffalo Bills as a Preferred Free Agent, minutes after the conclusion of the 2012 NFL Draft. Unfortunately, I did not make the Bills roster, but was lucky enough to have a chance to play in the Canadian Football League (CFL) for the Winnipeg Blue Bombers the following year. After being on the practice squad for the first four weeks of my rookie season, I was promoted to starter due to an injury and haven’t looked back since. During my rookie season, I was named the team’s Rookie of the Year and went on to lead the team in tackles during my second season. After my first two years in Winnipeg, I had the opportunity to try out for my hometown team, the Pittsburgh Steelers. I had a great experience and learned a lot before eventually being released during the final cuts in the pre-season. Fortunately, Winnipeg had offered me another contract to come back and play for them.

ECAC Co-Defensive Player of the Year

Pour all ingredients into a blender, blend and enjoy!